No matter how you want to read—or watch or discuss—all about it the Iowa State Daily continues to adapt and deliver content in fresh ways.

Raise your hand if you once perfected the art of folding the Iowa State Daily to compactly stow it in a backpack and discreetly chip away at the crossword. #broadsheetproblems

These days, the crossword (and Sudoku) remains intact, but the Iowa State Daily Media Group’s flagship publication is much more svelte.

In August, the independent, student-run, 128-year-old publication debuted a new tabloid-size format. The 11×17-inch paper is notably smaller and decidedly more design-driven, containing large, eye-catching photos and illustrations, multiple entry points for the reader and ample white space in the vein of a news magazine.

The new look also boasts a redesigned, compact masthead, allowing room on a smaller front page for refer boxes to help capture the attention of the ever-elusive newsstand audience.

The updates were rooted in research, says Emily Barske, a graduating senior in journalism and mass communication and marketing who just completed her second year as editor-in-chief of the Daily.

“Some of the feedback in the focus group was that the paper was too large for students to read when they are in the dining center or CyRide,” Barske says.

The changes are much more than skin deep though. You’ll no longer find event coverage, breaking news and final Iowa State basketball scores in print. That content lives on iowastatedaily.com. In their place on page are feature stories, analysis pieces and depth reports that contextualize current events and provide a deeper look at the news. 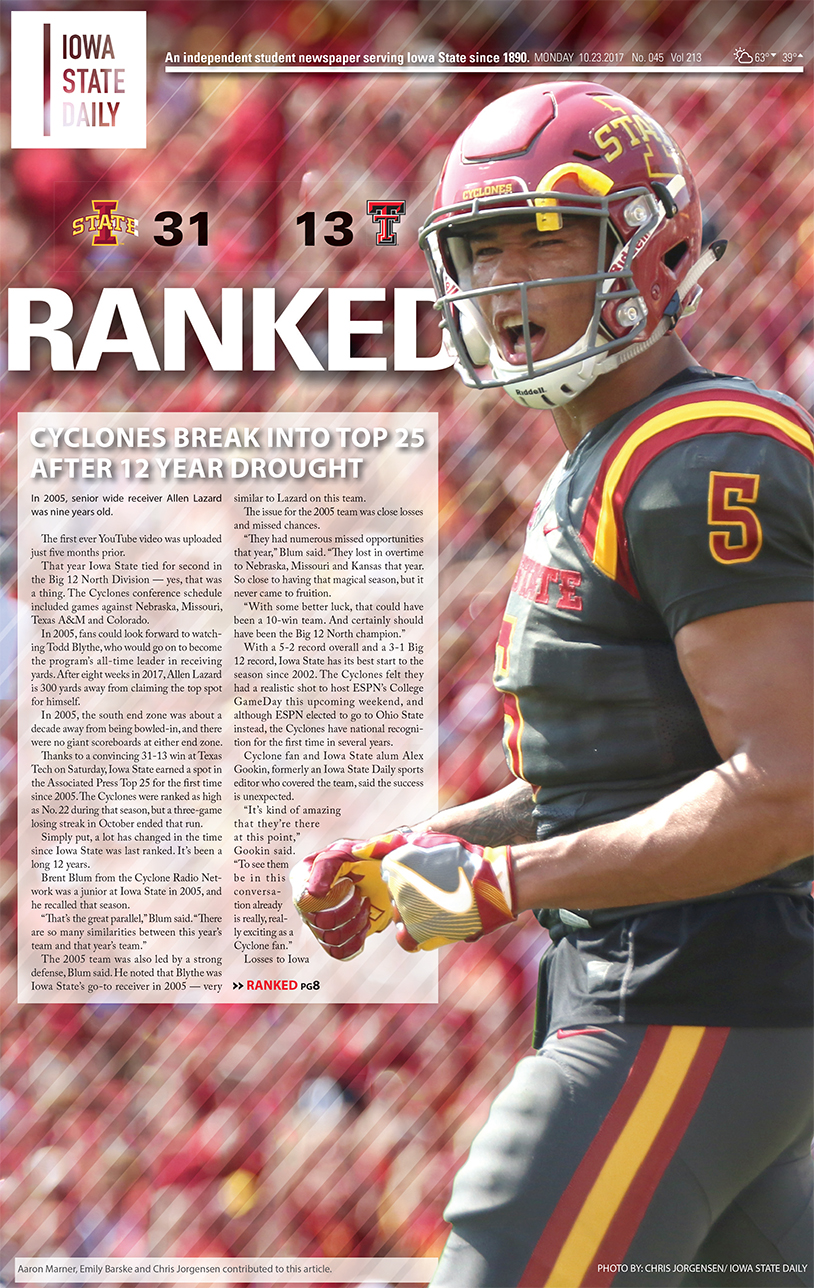 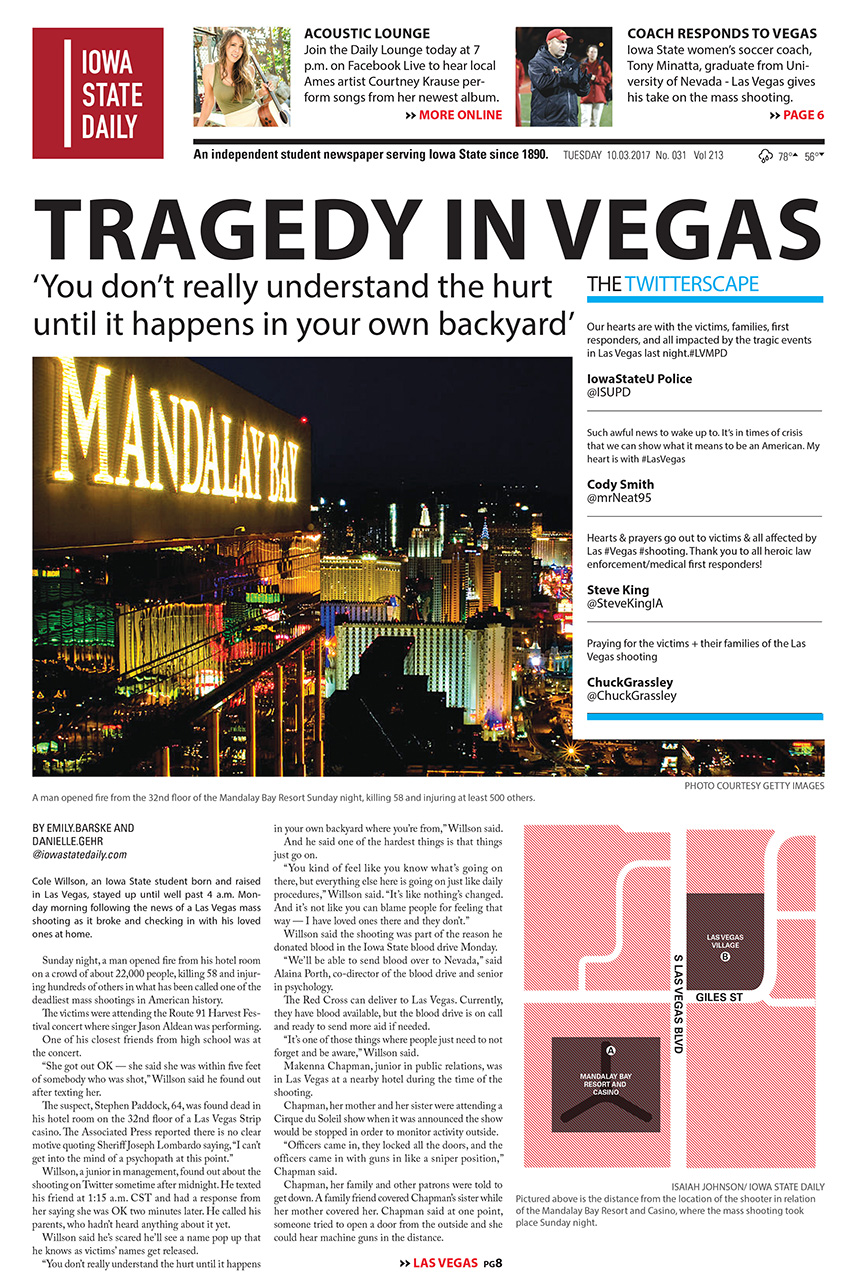 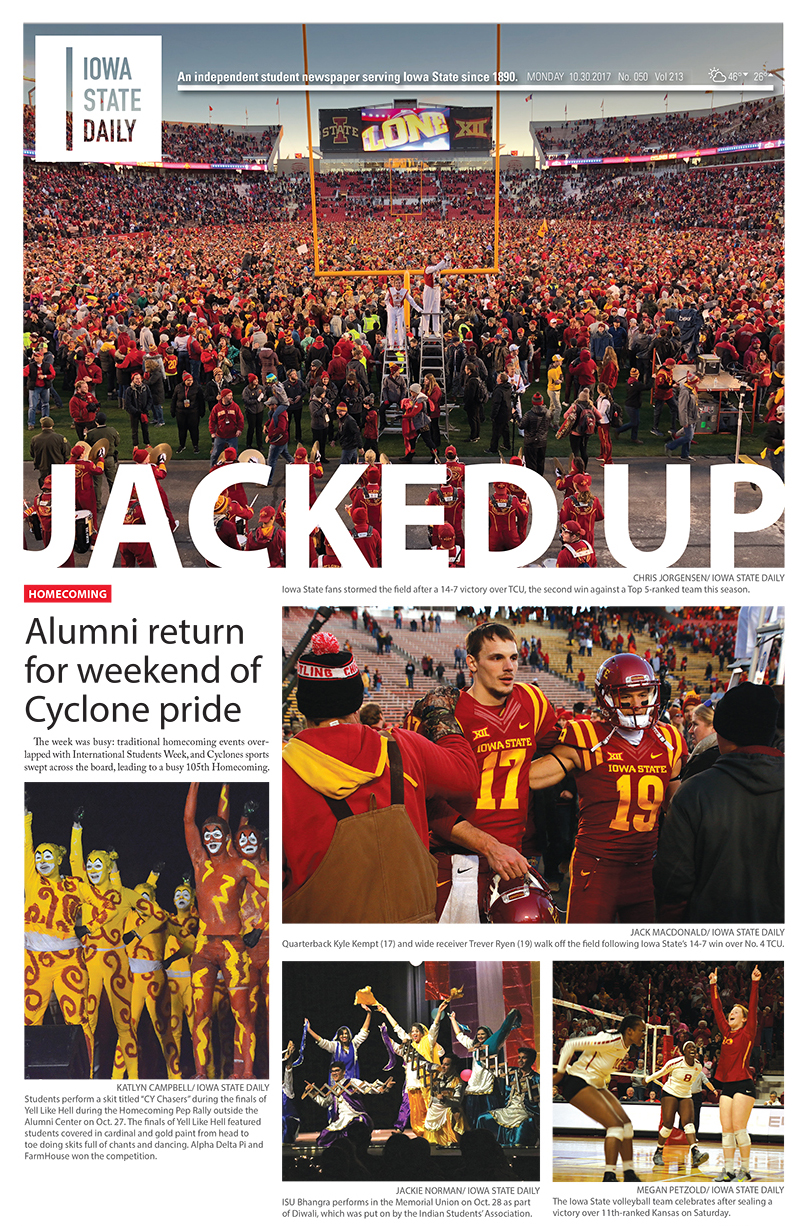 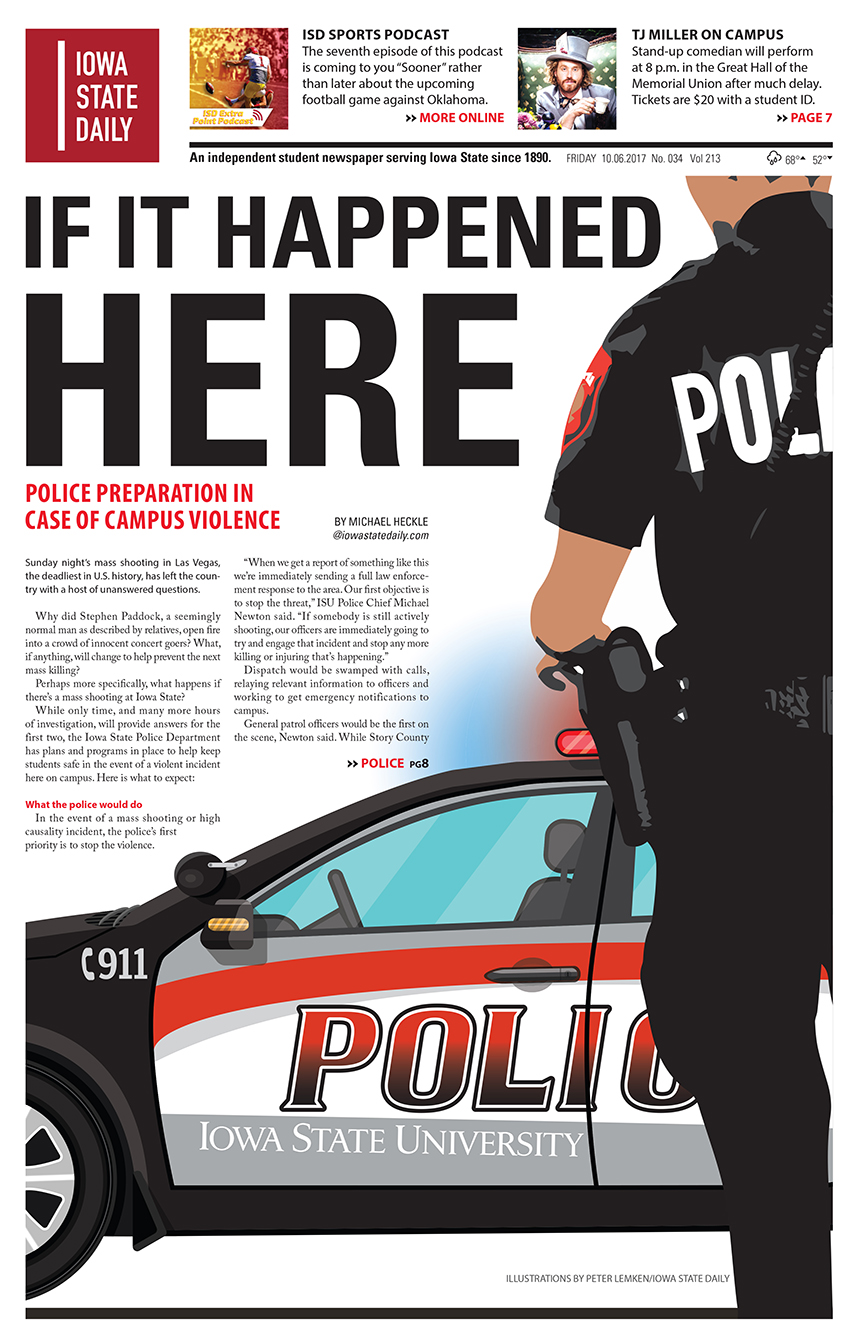 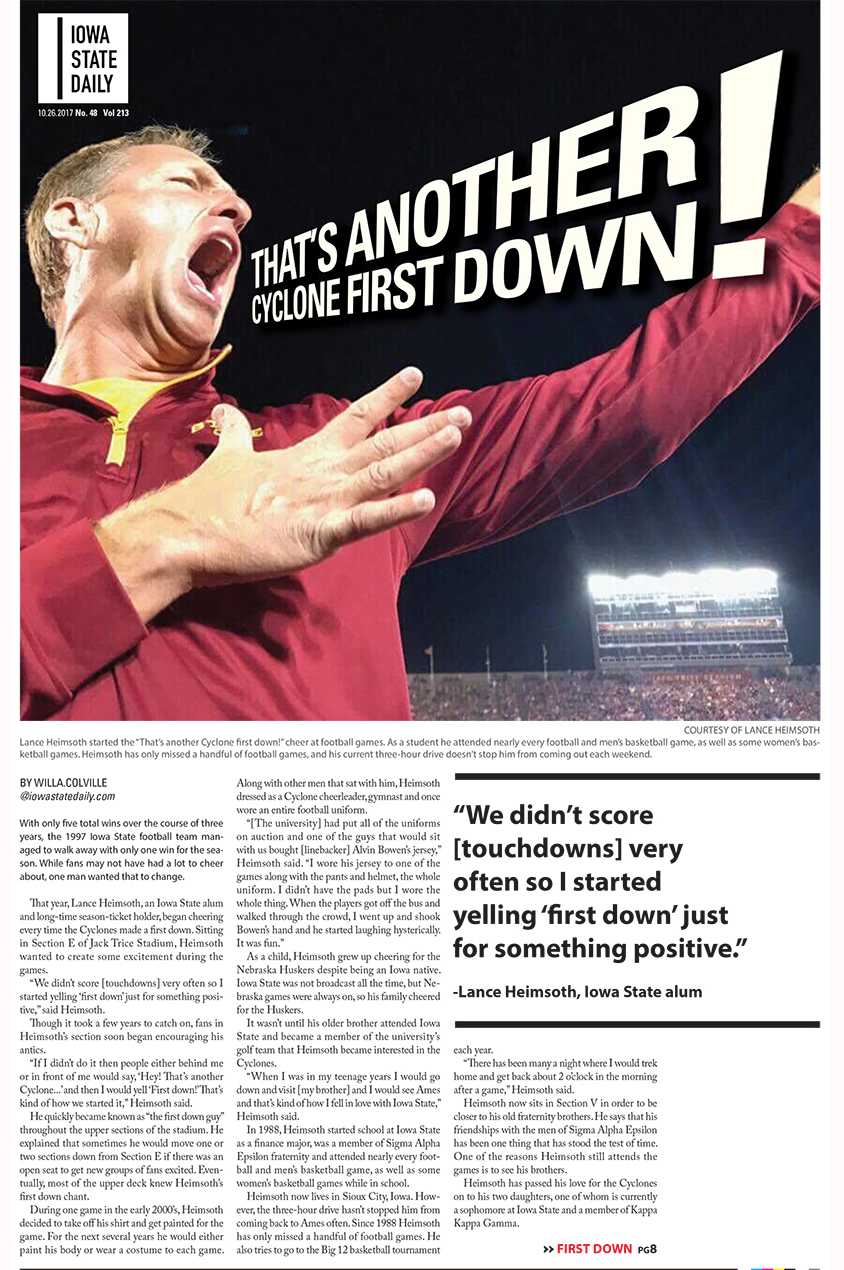 The redesign is indicative of the news organization’s overarching shift in editorial strategy, led by Barske and her team of more than 150 student editors and reporters. While some student news organizations have dealt with media’s changing dynamics by axing their print product, the Daily decided instead to double down and evolve.

“I’m fiercely protective of that five-day-a-week print experience as long as the students are valuing that,” says Lawrence Cunningham, general manager of the Iowa State Daily Media Group. “We have some really incredible students who are making really great intentional decisions in how they’re moving our products forward right now.”

Now everything that goes in print has to go through a litmus test: Will it be just as relevant at 9 p.m. as it was at 9 a.m.? If not, print isn’t the place for it.

“My overarching goal for the staff is to find new, better and different ways to strengthen our relevance in the community,” Barske says. “Each of our platforms has to have a differentiator from our other platforms. If we want our print product to be relevant it has to be different than what’s on the website.”

Stories that are planned for print are turned in at least two days out to allow time for editing and design. Centerpieces are planned at least two weeks out. When big breaking news happens, the staff adapts but in a different way than they might have in the past.

Barske cites the October 1, 2017, Las Vegas mass shooting as an example of how the Daily’s print product has evolved. The team scrapped their plans for highlighting News Engagement Day in the October 3 edition in order to localize the tragedy. Rather than printing the most recent updates as of press time (they updated the news brief online throughout the day), they included stories on two Iowa State students and a coach who had Vegas connections.

A new depth reporting team supports the Daily’s effort to be more analytical with the creation of deeper, richer content for the print product and the web. Their first effort was a 10-part series on rental housing in Ames released in the months leading up to the passing of a new city ordinance on rental occupancy in low-density rental housing in January 2018. Their latest and ongoing effort tackles substance abuse in Iowa related to the opioid epidemic.

The new format has allowed Daily staffers to tackle topics they may have tackled before but in a more comprehensive way. Hate at Iowa State. Students living with disabilities. People affected by the Deferred Action for Childhood Arrivals.

These topics get more real estate to shine in print and supplemental multimedia content enhances them online.

“It’s not uncommon for a reporter or an editor to write 3-5 stories that week, and then only have one of them go in print,” says Emily Blobaum, the Daily’s managing editor of content and a graduating senior in journalism. “In a way, I feel like it may be more stressful for people creating content because they have to create different content for different platforms, but in the long run I think it’s helping them because they’re going to know how to churn out an 800-word feature, but they’re also going to know how to write a story on deadline that needs to go up right away.”

As the news industry has evolved, the Daily staff has gradually shifted its focus to the digital space in recent years. This year, though, the transformation feels a little more complete and the changes to the print publication have made all the difference, says Mark Witherspoon, editorial adviser of the Iowa State Daily Media Group.

“We have been trying to be a digital-first newsroom for years,” Witherspoon says. And we couldn’t as long as we had the old broadsheet that we also had breaking news in and all that … [the staff] didn’t have time left over for the other stuff or even thinking about. Now they are truly thinking about it—and actually doing it.”

One of the biggest digital feats is the Daily Dose, an email newsletter sent out to the entire Iowa State campus community.

The e-newsletter consistently reaches more people than any other of the Daily’s products, because it lands right in their inboxes before the day starts, Witherspoon says. With a casual, snappy voice, it showcases the top news stories of the day, while also highlighting content that may not organically rise to the top.

Even if Daily Dose readers don’t click through to the website to read the full articles, they’ll get enough to start their days more informed, says Emily Clement, junior in public relations and the Daily’s lead digital editor this year. The newsletter’s most popular features—a daily joke and a calendar of the day’s events—encourage opens, she says.

“I would say the newsletter has helped that digital focus in some sort of way, whether people open it every day and don’t pick up the paper, which is not necessarily what we want, but it’s just an addition to whatever else they’re reading on the website or the paper,” Clement says.

Social media also provides additional opportunities for audiences to engage with content in new and different ways. The Daily’s Instagram followers will find study tips, things to do this spring and 10 fun facts about Iowa State in celebration of its 160th birthday as Instagram Story Highlights (in case they missed the full 160 facts found in print or online).

On Facebook, video series deliver fresh content that can’t be found elsewhere: reporters try activities with student organizations in The Daily Does, musicians perform live during The Acoustic Lounge and participants debate issues and discuss current events in The Daily Lounge. Short, instructional Daily Eats videos work well on many channels and show audiences how to make simple recipes.

“Now, oh my god. You see stuff online and on Facebook and social media that you don’t see in the print edition. And that’s what we’re trying to do is make sure we provide people an array of different products so they have a full understanding of what’s going on at their university,” Witherspoon says.

For generations of students, working as an editor for the Daily was not just a job but a way of life marked by late nights (and lots of vending machine meals) in the newsroom.

That’s not where you’ll find Barske most evenings. While still a regular presence in the newsroom, she spends much of her time engaging the community and overseeing the opinion section. That leaves the day-to-day content creation in the hands of Blobaum, her managing editor.

“All the editors and chief have done a marvelous job of being the face of the newspaper, but Barske has taken that to a new level as far as engaging the community,” WItherspooon says.

Blobaum arrives in the newsroom by 3 p.m. each day for production, but she says she’s on call 24/7 and meets with editors throughout the week. She leads a daily editor meeting at 4:30 p.m. where the team discusses the status of what’s going in print the next two days, reviews digital analytics, decides what to highlight in the e-newsletter and makes social media plans.

The newsroom starts to see a trickle of people around noon and fills up with editors, designers and reporters by late afternoon. But they’re also working throughout the day, often remotely. The paper is due at 10 p.m.—two hours earlier than the old deadline so the printer can churn out the smaller tabloid pages before switching the presses for broadsheet.

“We want reporters and editors to have lives and not stay here until 12 or 1 like we did in years past,” Blobaum says. “That allows us to have a digital-first mindset because they’re expected to always be looking for the news during the day.”

With so many positive changes already underway, the Daily student and professional staff continues to look ahead and seek ways to further engage and provide value to the community.

The Daily’s Voices project, which provides a platform for content submitted by readers, aims to facilitate civil discourse and build awareness about diversity and inclusion on campus. The project earned the Daily a competitive grant from the Poynter Institute that provided newsroom training for Daily staff on covering diversity topics and facilitating conversations. The grant also supports public forums hosted by the Daily to create an open dialogue in the community.

A pilot program with KHOI has allowed the Daily to dabble more in podcasting. Inspired by the storytelling style of “This American Life,” the first podcasts were released in spring 2018.

“What I’m being told is that where our hires are different is that they’re capable of critical thinking as business people in ways that other new hires are not,” Cunningham says. “Every week we sit as a staff and have a fireside chat. We talk about the state of our business. We talk about our financials. We talk about stressors…Teaching our kids what drives those critical decisions is really important.”

In an era of rapid change, two things remain certain. The Daily will continue to find ways to evolve and provide a training ground for students to apply the media skills they’ve learned in the classroom.

“Essentially, we’re trying to create an atmosphere where our people will experience the same or very similar kind of journalism that is going on outside in the real world,” Witherspoon says.

If you’re feeling a bit nostalgic for what once was, Cunningham has the antidote in his office—tabloid-size editions of the Iowa State Daily from the 1970s. Side by side with today’s paper, the resemblance is a bit uncanny.

It’s a good reminder that often what goes around, comes around after all.