Angela Powers’ life and career have been marked by firsts. As the first of six children in her family, the first female professor in the Department of Journalism at Northern Illinois University and now the first female director of the Greenlee School, she isn’t afraid to lead the way.

Powers brings that pioneering spirit to Greenlee as the school’s 16th director.

“We’ve come a long way, but where do we want to be in five years? That’s exciting to me,” Powers says. “I’m looking forward to tackling key issues and strategically moving forward.” 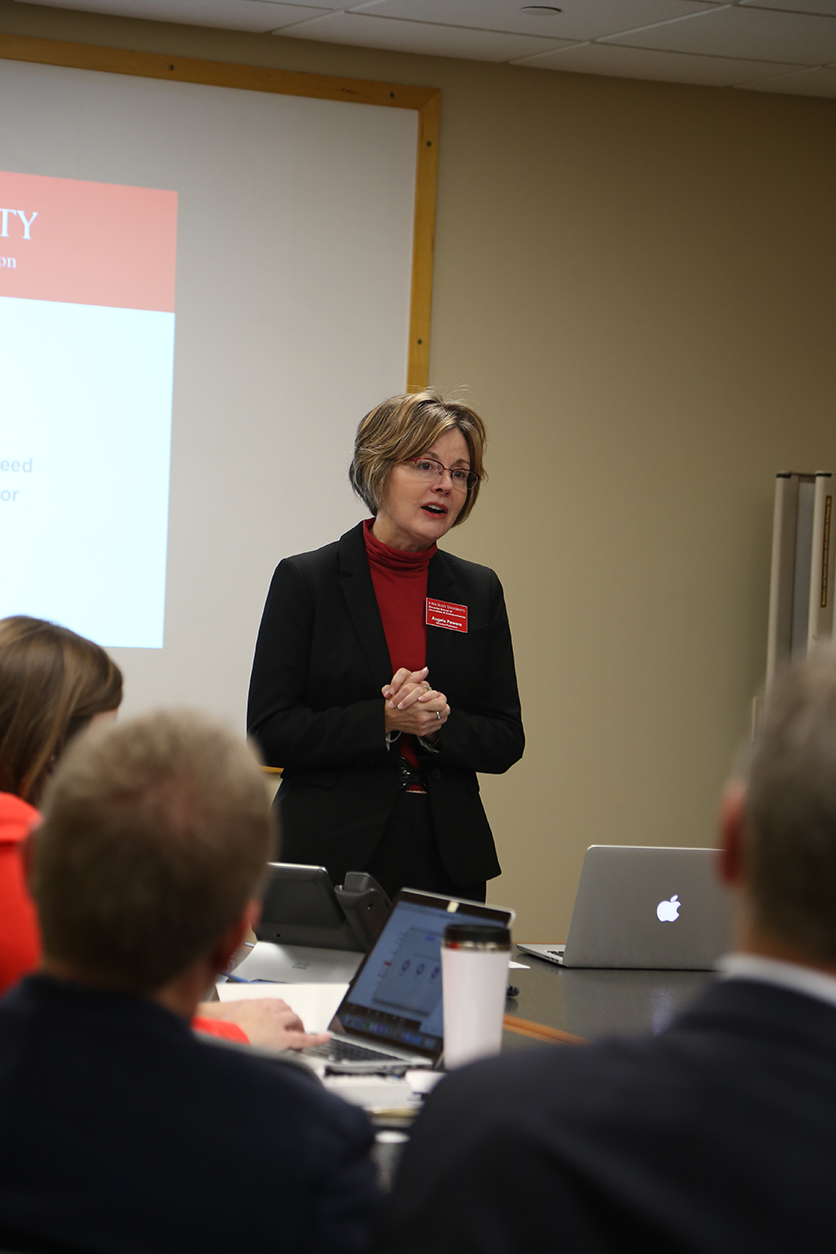 Powers’ path to Greenlee began on a farm in small-town Illinois, where she grew up in a household nourished by news. The appearance of Life in the mailbox was a highly anticipated treat, the (Peoria) Journal Star arrived on the doorstep twice a day and watching the evening news with her family was a daily ritual. From this media-saturated environment grew a passion for news.

After receiving her bachelor’s degree from Illinois State University, Powers embarked on a career in broadcast journalism. In her first gig as a TV news reporter at a CBS affiliate in Peoria, Illinois, she covered the county and city government beats. She anticipated a long, successful career as a TV journalist—until a former professor contacted her, asking if she had ever considered graduate school.

The thought began to take root. Soon after, she returned to Illinois State for her M.S. and later went on to Michigan State University to earn her Ph.D. in mass media. With that, her path continued in academia.

Powers’ academic pursuits and research in media management and economics have taken her all over the world—from the United States to countries such as Sweden, Egypt, Kuwait and Jamaica. She was even a Fulbright Scholar for a semester, teaching and researching at Vytautas Magnus University in Kaunas, Lithuania. Eventually, she landed at the A.Q. Miller School of Journalism and Mass Communication at Kansas State University, where she served as director from 2004 to 2012 and as a professor for the past five years.

The Road to Ames

Powers heard about the director position at Iowa State from a friend who had seen the job posting and reached out to her saying, “This job is for you.” As she began looking into the position, a search firm contacted Powers and encouraged her to apply, reinforcing a sense of fate. Ultimately, her friend turned out to be right.

The search for Greenlee’s next director was spearheaded by Beate Schmittmann, dean of the College of Liberal Arts and Sciences. Schmittmann knew choosing just the right candidate was imperative for a school of Greenlee’s stature.

“As the dean, I view the Greenlee School as one of the gems in the LAS crown,” she says. “It really is at the cusp of emerging in a very strong way on the national scene.”

The search process involved a rigorous assessment of Powers’ merits, skill sets and background, as she competed with a diverse pool of talented applicants.

“She stood out as the strongest for collaboration and for a commitment to relentless innovation with a focus on continuing to develop basic skills of the students,” says Donna Ramaeker Zahn, a Greenlee advisory council member on the search committee.

Greenlee offered a balance of professional and academic leadership perfectly suited to Powers’ background, and the accomplishments of its students and faculty impressed her. When Schmittmann extended the job offer, it was met with a wholehearted yes.

“I was excited beyond belief,” Powers says. “To become part of this wonderful program—I was just thrilled.”

A Vision for Success

Since officially starting July 1, Powers hasn’t wasted any time putting her ideas in motion, meeting with faculty and staff and appointing committees to tackle strategic initiatives.

“She’s not someone who leads by force,” says Michael Dahlstrom, associate director and associate professor. “She sees what everyone’s vision is and helps shape that into something that’s both exciting and progressive, but also reflective of what the faculty want to do.”

With support from the college, her immediate goals for Greenlee include having a distinct, student-driven focus: infuse the curriculum with digital and mulitmedia, heighten national awareness of the school, increase diversity and inclusion and modernize the facilities.

“We are a top journalism and communication program in the U.S. and beyond, and we will continue to grow in stature.” —Angela Powers

Plans to add more digital emphasis to the curriculum are already underway.
A committee is exploring the possibility of adding optional, one-credit modules to enhance existing courses.

“We’re hoping to get more expertise on the cutting-edge aspects of all our fields, and we can do that by enhancing what we already teach with specialized modules,” Powers says.

Possibly offered in the evenings or on weekends, the skills-based workshops would be led by experts who would discuss the latest technology, digital techniques or other timely topics.

“We want to be known as the top school in what we teach and provide our students in terms of technology, critical thinking and skills such as writing, producing, editing,” Powers says.

While plans are still developing, the modules could be implemented as early as fall 2018, Dahlstrom says. These course supplements may focus on topics such as data visualization, social listening tools, smart phone journalism and social media as a publishing platform.

“We want to be there right in front, so our students are the ones that go out and say, ‘Yeah, I can do that,’” Dahlstrom says.

While the modules will best serve current Iowa State students at first, the committee is also exploring a potential model that may appeal to working professionals who want to pursue short-commitment, high-impact education opportunities to beef up their skills.

Powers is also working on strategies to enhance the school’s national profile by highlighting its excellence in research, service and teaching. With this goal in mind, she’s overseeing the inaugural Greenlee Summit April 6—yet another installment in her pattern of firsts—in collaboration with the Greenlee Advisory Council, led by Chair Barb Iverson and Vice Chair Rick Phillips, as well as Greenlee faculty and staff.

Open to industry professionals, the 2018 summit boasts a lineup of media experts and Greenlee faculty who will discuss hot topics such as social media, fake news and elusive audiences. Powers hopes to build upon this event in future years, amplifying national awareness of the school through service.

“We’re starting as big as we can, and we’re expecting it to grow from there,” she says.

Using a transparent leadership style and a student-centered focus, Powers plans to continue strengthening the Greenlee School from the inside out. To add to the faculty’s ranks, a search is under way for a tenure-eligible professor in public relations. Two new hires—a professor with expertise on media and race and one
with expertise on the First Amendment— will add diversity and dimension to Greenlee’s arsenal of experts in 2018.

“We expect to be the place on campus where people will go for expert information on First Amendment issues,” Powers says.

In the long term, another goal is to modernize Hamilton Hall through renovations. Powers hopes to create a high-tech social media lab that can help students keep up in today’s fast-paced media environment. Ideally, the space would be equipped with monitors for analyzing social media activity, computers carrying software necessary to create multimedia messages and other technology related to digital communication. The update would transform Hamilton into an unmistakable media hub, Powers says.

An important step in future planning is seeking student feedback, Powers says. The director hosts monthly question and answer sessions with students. While each is focused on a specific student club or publication, all students are invited to attend and share their experiences or voice concerns.

“Students become more engaged in their school if they know that they’re being listened to and are part of the decision-making process,” she says.

Although Powers began the semester as an unfamiliar face to many, she has since worked hard to be someone students can recognize in the hallways of Hamilton.

With high hopes and ambitious goals, Powers has discovered a sense of belonging within the Greenlee community.

“I have felt at home here from the very start,” Powers says, “and that’s a great feeling.”

GET TO KNOW DR. POWERS

The Greenlee School was named one of the initial programs to benefit from a $145 million-dollar endowment awarded to the College of Liberal Arts and Sciences this year. The gift resulted from the donation of an anonymous couple’s equity stake in Curriculum Associates, LLC, which recently entered into a capital partnership.

For LAS, the endowment will generate between $5-6 million in revenue each year, of which a portion will go to Greenlee. Director Angela Powers expects the funds to be put to use as soon as this year. Effects may include: